The true Cinderella story of animated princess films is not to be found in Disney’s Cinderella but in the real-life story of Disney rival Richard Rich’s The Swan Princess.

Overlooked at its box office ball of 1994 (the belle of that ball being the re-released The Lion King), The Swan Princess has, over the years, found its faithful retainers, and its beloved kingdom prospers to this day.

The eighth (!) direct-to-video sequel was just released this year along with a 25th anniversary blu-ray of the original movie, complete with vintage “making of” and retrospective documentaries.

The Swan Princess is an unheralded switch point in the history of animated films, pointing both to the past and the future of the genre. Technically, it is the last to completely use hand painted cels; narratively, it is the first to overturn the tropes of fairy tale princess cartoons.

Princess Odette looks forward to the type of “progressive princess” praised today. Almost a good two decades before Anna in Frozen would be upbraided for saying “yes” to a man she just met, Odette said “no” to the handsome prince by her own counsel.

Indeed, The Swan Princess, nearly twenty years before Frozen would be celebrated for the same, begins with the ending of the traditional princess movie.

In fact, the first act plays as a complete mini-Disney Princess movie (though The Swan Princess does it its way and breaks new ground as we’ll discuss below). It even opens (the two future lovers being introduced as children at the princess’s birth) and ends (their blissful dance as adults against a color streaked abyss of bliss) just like Sleeping Beauty frames its entire story!

Then, The Swan Princess really begins its own original tale for a children’s animated film, one that asks, “What happens if the princess refuses to settle for a man who appears to be invested only in her appearance?”

I say “appears” because, although Prince Derek is popularly seen as a jerk for his “what else is there” than your looks comment, I don’t think he deserves it. After all, when he is still a child, before the parents start interfering, he has already given Odette his heart. 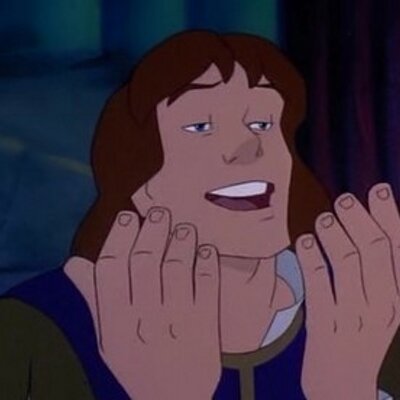 Is this really the face of a clod? I say thee “nay!” Prince Derek Trying Really Hard Here Not to Offend a Woman.

Okay…it’s a locket heart, but he’s entertaining her in her crib with it, when, obviously, looks or romance aren’t motivators. He’s just selflessly enjoying making her happy because her happiness makes him happy.

He offers the heart locket in childhood purity, and Odette takes it in the same spirit…and she never gives it back, nor does he ask for it, even after he’s disappointed her bitterly. In fact, it reappears throughout the movie as a symbol of their on-going connection.

While Derek lacks the charisma of Aladdin or even that of the surly Beast, he’s more interesting than The Little Mermaid’s Eric…and has more depth. Prince Eric’s reaction to Ariel when he discovers she’s mute is shameful. It’s to Derek’s credit that when he discovers his girlfriend is a swan half of the time, he’s more dedicated than ever to her. I mean, could you do it?

The road to such devotion has not been an easy one. Long before Derek does this major reevaluation on how important appearances are to him, the couple’s parents have made the mistake of pushing them on each other.

This exposition plays out in a “growing up” montage. It’s not celebrated like Frozen’s “Do You Want to Build a Snowman,” but “This Is My Idea” is the more ambitious exercise in visual and musical storytelling by “time passage encapsulation.”

More, this sequence goes places no Disney princess movie ever has before or since. For once, we see a princess growing up through the awkward years, alongside her future – and antagonistic – love interest.

A Disney prince might, as a little boy, back away from his engagement to the girl in the crib, but by the time the two meet again as perfectly pitched perfect physical specimens, they are always eager to begin harmonizing at once.

Here, however, Odette and Derek over the years fight their intended marriage…and each other. Odette shows herself capable of giving even better than she gets.

This princess is a complex but consistent character: scrappy, flirty, poised, girly, tough…and principled. She refuses to settle for less than she wants in love despite her still palpable desire for Derek as a man. After all, as our animated Prince Charming, the boy is not exactly lacking in the looks department himself. 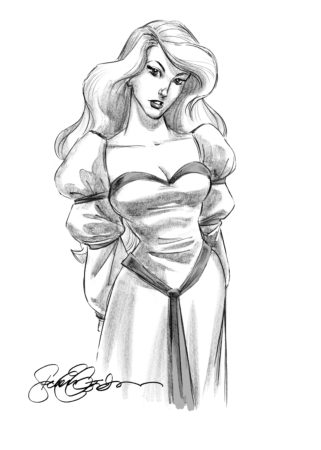 In fact, what’s always overlooked in taking Derek to task for being shallow is that Odette values his appearance as much as he does hers.  She does a 180 when she sees how hot her intended has grown up to be. Trust me: if Derek had matured into Quasimodo, Odette would not be purring, “This is my idea.”

The difference is that, while valuing physical attraction, Odette’s mature enough to know there has to be more in a successful, long term relationship.

The sexual pull is a strong one, though, and, as she rides off, we see her looking sadly after him, still feeling poignantly the romantic draw, but having the strength of character to say, “Uh-uh. I deserve better, and I won’t give in and equate my physical attraction to a man with making him an ideal lover.”

Odette is an elegant Grace Kelly type who, according to her designer Steven E. Gordon, never lost the Tomboy in her. I happen to be an unapologetic apologist for “damsels-in-distress,” and Odette demonstrates that “damsel in distress” does not equal “wimp.”

Indeed, Odette is phenomenal –probably the most self-possessed, principled and disciplined animated princess ever. There is certainly no one quite like her in all the Disney canon of royal heroines.

One understated moment alone brilliantly sets Odette apart from every other princess, combining her compassion and feminine grace with her tough spirit and capability.

A bird  with an arrow through his wing crash lands where she is kept prisoner. Never flinching, she matter-of-factly goes about mending his wound. No Disney princess has ever done anything like snap an arrow and push it through with not even a flinch!

This is also a subtle reminder of how Odette is the ideal partner for Derek, whose hunting prowess were told is renown, and thus of the compatible dimensions needed for a successful loving relationship outside of that of romance.

(A scene from one of the Swan Princess sequels explicitly shows what is implicit in the original: an enduring relationship involves sharing, or at least being open to, interests of your lover outside romantic attraction.).

She is a heroine with integrity of character. When she falls into the villain’s power, she refuses the evil Rothbart’s proposal that would lift her curse of spending the daylight hours as a swan but hand the kingdom over to him. She won’t betray her dead father’s legacy to relieve her suffering any more than she will betray her own higher standard in a man for immediate pleasure.

I wish the story had focused more on her in her relatable human form.  I think what the screenplay accomplishes with Derek could have been maintained and Odette still been brought more to the fore as herself.

Just suppose the storyline had taken a Ladyhawke turn, “Ladyswan” if you will. With just the one romantic partner under a part time transformation curse while they journey together to take down Rothbart or escape him. Our boy Derek would still have had to learn a lot about relating to a woman beyond physical attraction.

So, The Swan Princess is not perfect. Besides not showcasing our heroine as a human more as it might have, the soundtrack, which features some good numbers and an iconic theme melody, isn’t as consistently good as those of the Disney films of the time. And Rothbart as a villain is treated too campy to ever be taken as seriously as a threat as are Ursula and even Gaston.

So what? Much that is beloved is not loved, or lovable, because it’s perfect. We all know that we aren’t, yet still, like Odette, yearn to be accepted and cherished for ourselves as ourselves.

And isn’t this the express message of The Swan Princess, after all?  That there’re more important qualities that make someone or something worthy of love than achieving any ideal of aesthetic perfection?

Just as it is, for itself, The Swan Princess remains perfectly lovable, twenty-five years later and “far longer than forever…”

READ MY OWN VERSION OF A DIFFERENT KIND OF PRINCESS IN PORTRAIT OF A SNOW QUEEN! FREE on Kindle HERE:  http://amazon.com/Witches-Winter-Trilogy-Book/dp/B08R68J913

AND...FREE on Apple, Kobo, and Nook with this Universal Link HERE: https://books2read.com/u/bzgVLZ