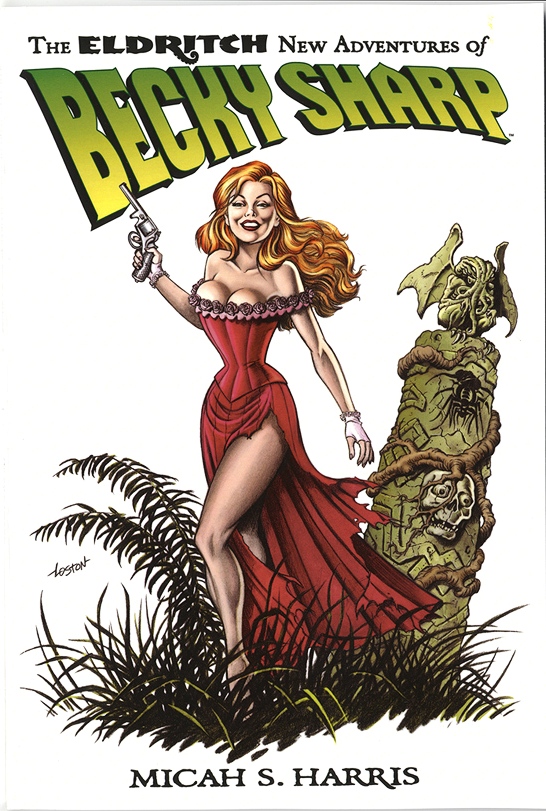 In a novel that can be fully enjoyed without having read William Makepeace Thackeray’s classic Vanity Fair, his villainess Becky Sharp enters the Cthulhu Mythos as an agent of H.P. Lovecraft’s Great Race of Yith! Follow Becky as she seduces, conspires, and fights her way through lost cities and prehistoric jungles, across swashbuckling seas and cult-infested deserts, from the 19th century and into the 20th!

Personally, I never would have made the connection. I never would have seen the possibilities of placing William Makepeace Thackeray’s realist ur-femme fatale, the marvelously ruthless Miss Rebecca Sharp of Vanity Fair, in a full-blown pulp fantasy adventure.

Can you blame me? Would you have made the connection?

Lucky for us, Micah Harris has this odd sort of vision and The Eldritch New Adventures of Becky Sharp continues his fascinating series of “what if” adventures. There’s a correct term for this subgenre that involves the lifting of characters and concepts from any number of popular authors’ legacies—often in concert with historical personages—to then mash them into improbably plausible alliances and relationships. Micah has told me the term—often, I suspect—but for the life of me I can’t remember it.

Maybe that’s because this particular subgenre is beyond my personal capacity for invention. My mind doesn’t think down those paths. Which is fine by me, because it makes it all the more pleasurable to read Micah’s cross-pollinated hijinks: his inventiveness invariably catches me by surprise. Although we both share similar pulpy interests and both inject them liberally into our storytelling, Micah takes his borrowings in directions of which I can’t conceive. True surprise in storytelling is rare enough and always welcome.

Micah has tons of brass and I think he takes his biggest risks in this story. Foremost, it’s all good clean pulp adventure, but there is something else underlying the rollicking thrills. Micah has placed moral barometer Becky here for good reason: there is a strong current of morality running through this story, much as Micah has examined in his graphic novel of 2003, Heaven’s War. Here, however, the morality is of a different sort.

Becky may have been a shockingly immoral character to a mid-19th century culture built upon social and religious convention (and I’ll admit I don’t know enough about Thackeray, a noted humorist, to guess at his true intent), but, by transporting her to a new context, one situated in a frighteningly expanded universe as revealed by 20th century science, her “immorality” becomes more a reflection of a practical will to survive in a hostile environment. In Vanity Fair, Becky does what she must to flourish in the English social jungle to which she was born—and she was pretty darn good at it. She certainly wasn’t hypocritical about her aspirations. Here, Becky is given proper respect: her skills are tested in the (allegorical?) jungles of an annihilating cosmos.

My hat’s off to Micah for putting those skills to the service of a cognoscenti that has graduated from fretting class distinctions to the bigger problems now recognized to confront the human race in a Lovecraftian universe that doesn’t recognize moral superiority. Micah throws so much of the wonderfully outré at Becky, so much of the last two centuries’ speculative fears concerning our diminished status in the grand scheme of things, that I ultimately can’t help but sympathize with her peerless survivalist aptitude. (And if that aptitude includes a predatory sexual allure, hey—she works with the tools she’s been given, and all the more fun for us readers.)

I know that if I were lost in Micah’s construct, searching out Kor in deepest Africa, or stumbling over Skull Island, or trapped inside one of the Great Race of Yith, or moving towards an inner Earth through horrors borrowed from myriad fevered imaginations, I would absolutely want to have someone as pragmatic and skilled as Becky with me.

Dangerous? Yes. In the end, she might very well have us all as hive insects to her queen bee. But with her on the throne, at least we could be assured that the species would survive.

And that’s saying something in a Lovecraftian universe.

Read on and see if you don’t agree.

The Eldritch New Adventures of Becky Sharp is © and ™ 2008 Micah S. Harris.